Euphonium vs. Tuba – The Difference Explained!

In this article, we'll look into the difference between tube and euphonium, and compare them with similar musical instruments.
By
Alecia Steen

To the uninitiated it may seem that the tuba and euphonium are pretty much the same instrument. Understanding these instruments can be difficult if you’re looking at euphonium vs. tuba sound differences to make a final decision. So, are they the same? No, they are quite different although they can be considered to be part of the “tuba family” of brass instruments. First, the tuba is typically twice the length of the euphonium and it creates a sound that’s an octave lower. The tuba also has a larger mouthpiece, but the note fingerings are similar to a B-flat tuba. In this article we will take a closer look at both and how they differ to help you make informed purchasing decisions.

Tuba vs Euphonium: what’s the difference? 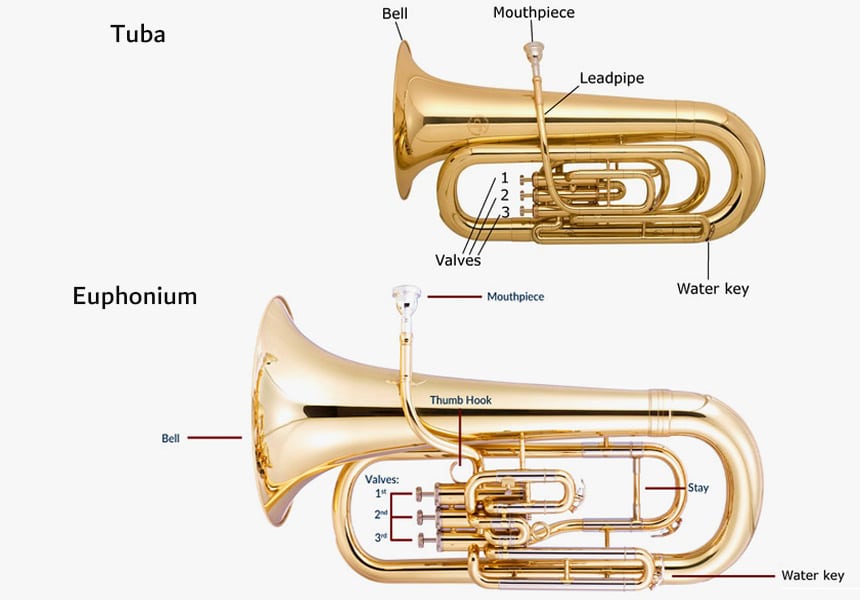 When you look at different types of wind instruments, you quickly realize that they come in many shapes and sizes. When it comes to the tuba and euphonium it’s easy to see that the tuba is larger and it generates notes in a lower octave. You may see a tuba played standing with a marching band or the musician could be sitting down playing with an orchestra. The euphonium looks similar in many ways, but it’s smaller and it can create a higher note range.

The tuba originates in Germany, where it started out mainly as an instrument for marching bands. Over time, the mouthpiece position was altered which made the tuba easier to play sitting down with an orchestra. Over the years, the tuba has become an integral element in the brass section and every orchestra has at least one. The tuba is available in five sizes, they have different tube widths and this creates a different range of possible notes. A tuba will usually have three or four rotary or piston valves to change the notes. The typical role of a tuba in the orchestra is to create a series of low and/or staccato notes.

The euphonium is also a brass wind instrument that can be played in the sitting position. This instrument is often found in a symphonic orchestra, it has a dark and rich tone, which places it in a tenor role, much like a cello in a string section. Euphoniums typically have three or four valves like the tuba, but the conical tube grows in size along the length of the instrument.
When it comes to the tuba vs. euphonium comparison it’s interesting to note that the latter can be a “compensating” or “non-compensating” instrument. A compensating euphonium has an additional tube which helps the player to keep tricky keys in tune.

As you can see, the tuba and euphonium are quite similar in some ways, but there are key differences to consider. Although they both belong to the same family of instruments, they sound very different and the tuba is larger. If you play the tuba you’re going to be playing lower notes in an arrangement and vice versa. The euphonium has a higher range of notes which you are delivered with a smooth tone. As a beginner euphonium player, you may find that the instrument is harder to master because the intonation is harder. Both instruments bring their unique sound to any arrangement which makes them an ideal choice for marching band and orchestral musicians.

Tuba vs euphonium vs baritone

When you look at the main differences between the tuba vs, euphonium vs. baritone, you will quickly realize that the bore size is the major factor. The euphonium has a conical shaped tube that’s wider as you progress from the mouthpiece to the bell of the instrument. But, the baritone has a consistent bore size along most of the instrument length which creates a bright and brassy sound. In fact, a baritone is considered to have a small bore, it’s pitched in BBb and it only has three valves. A euphonium has a larger conical bore with three or four valves which creates that distinctive dark sound.

Tuba vs euphonium vs sousaphone When you’re looking at the differences between the tuba vs. sousaphone vs. euphonium choice, there are other considerations. A sousaphone is a brass instrument that was invented by John Philip Sousa and J.W, Pepper in 1893. The initial design was based on the tuba and helicon instruments with an upwards pointing bell. The name sousaphone comes from the suggestions that Mr. Sousa, who was a conductor and composer, made during the design process.

So, when you look at a sousaphone, you will notice that it’s a very similar instrument, but it does have a different shape. Many people believe that sousaphones are just cheaply made alternatives made from fiberglass. Although you may have seen white sousaphones they don’t need to be made from cheaper materials. The more expensive sousaphones that you may see in an orchestra would be made of the same materials as a tuba or euphonium.

Tuba vs euphonium vs trombone When you look at the tuba vs euphonium vs trombone differences, you will notice that the addition of a slide is the standout feature. Brass instruments can be the easiest and hardest instruments to play depending on how you approach the learning process. If you’ve never played a brass instrument, you may think that it’s hard to work out the slide position on a trombone to correlate with the valves on a euphonium or tuba. But, this process is pretty easy, many players learn this in high school marching bands and they get proficient in next to no time with practice. However, it takes some extra effort for a tuba or euphonium player to adapt their valve playing to a slide on a trombone. A component trombone player can play a tuba or euphonium once they’ve worked out the positions, but the reverse is not necessarily true. Of course, this is only a surface level of understanding and to truly master any of these instruments a lot of practice is required.

The main difference between a valve and slide based method to create notes is a little more involved than you may imagine. Aside from the note creation, both methods add unique tonal qualities to the notes and a good euphonium or tuba sound will sound very different to a good trombone sound. A trombone has a very focused and punchy sound which is very different to the more spacious and bass orientated tones of a tuba or euphonium. As we mentioned earlier you will notice huge differences in sound between a tenor tuba vs. euphonium or a brass tuba vs, euphonium and other comparisons that you may make. The variation in character and tone is astonishing when you consider that they are considered to belong to the same family of brass wind instruments!

When you’re thinking about purchasing the best euphonium or tuba, there are a few considerations you need to make. They are: cost, durability and the ease of response. You need a brass wind instrument that you can afford, it should be robust enough to survive regular use and travel and it needs to be a joy to play. If you like the sound it makes and it has a good resale value if you want to upgrade later it’s worth the extra investment. Before you make a final commitment to buy, talk with a band director or your private music teacher and ask them for help. Now that you understand the euphonium vs. tuba differences, it should be easier for you to choose the right instrument for you.

pinterest
Related Articles
How to Clean a Saxophone
18 Different Types of Wind Instruments – What Are They?
7 Best French Horns for Novices and Professional Players
5 Best Oboes for Everyone: from Novice Musicians to Professionals
5 Best Bagpipes for Beginners, Enthusiasts, and Pros
5 Enchanting Ocarinas for Elegantly Sounding Melodies
Leave a Reply Cancel reply
Experts Advise
1
irish bagpipes vs. scottish bagpipes
2
oboe vs bassoon
3
types of wind instruments
4
how to play bagpipes
5
how to clean a saxophone
More Research on Woodwind
french horn
Most popular
2
how to play harmonica
3
ocarina
4
oboe
5
bagpipes
Navigation