Ukulele Chord Progressions for Every Occasion

There are not a lot of things that have been around since the dawn of man, but it can be concluded that music is one of them. Whether you have been playing the Ukulele for a while or are just starting, you will come across chord progressions. Ukulele chord progressions are roman numerals, usually 3 to 4, that list what progression to play the chords in so you can produce quality music. When you are learning to play Ukulele, learning chord progressions will help you understand music and how it is created. If you do not have a ukulele, already check out some of the best Ukuleles that are under $500.

You’re never too young or old to test out the ukulele Trusted Source BBC Arts - BBC Arts - 100 Years of the Ukulele in 6 Minutes A Ukulele journey featuring We’ll Meet Again, Smells Like Teen Spirit & Ooh La La. www.bbc.co.uk , which is a beginner-friendly instrument. You’ll be surprised by how easy the uke is to learn from the first time you pick it up. You can play a lot of tunes that sound fantastic and are enjoyable to sing along to with only a few simple ukulele chords. A few additional benefits include the ukulele’s affordability, portability, and warm, uplifting sound. Think again if you think the ukulele is just good for breezy tropical songs. It can be used for almost any music, especially those written for the guitar.

When you begin to learn about chord progressions, you will notice that basically every song is built behind them. This is why learning about them can help you understand music better and help you learn quicker.

One of the most enjoyable facets of learning to play the ukulele is being able to compose your own music. Of course, we all start by practicing some of the more familiar ukulele tunes, but as time goes on, most players want to create their own original compositions. To do so, we’ll need to brush up on our chord progression knowledge.

Here’s a secret: composing songs is not nearly as complicated as you would think. There are many patterns and progressions that almost any songwriter follows, and they have stood the test of time. Of course, a brilliant songwriter knows when to break the rules, but the fundamentals are almost always followed. At the end of this post, you’ll see how many songs have similar chord progressions. Some popular ones include La Folia, Doo Wop Progression, Axis of Awesome, The Blues, Sensitive Progression, Flamenco Progression, and Classic Rock Progression.

A simple sequence of standard jazz shapes sounds easier on the ukulele than few other chords. The harmonies and sounds they create have an overwhelmingly pleasing feel to them.

Let us go over the fundamentals of playing jazzy chords on your ukulele. From jazz chord forms to common chord progressions to songs to educate themselves on the form, there’s something for all.

If played with standard chord forms, any of the following jazz chord progressions would sound incredibly basic. Fancier voicings that highlight more interesting decoration notes in the chord provide the majority of the charm of ukulele jazz.

A replacement chord is a shape that is played in place of a less interesting chord. They give you the core harmony while allowing you to expand on it for a more varied tone. 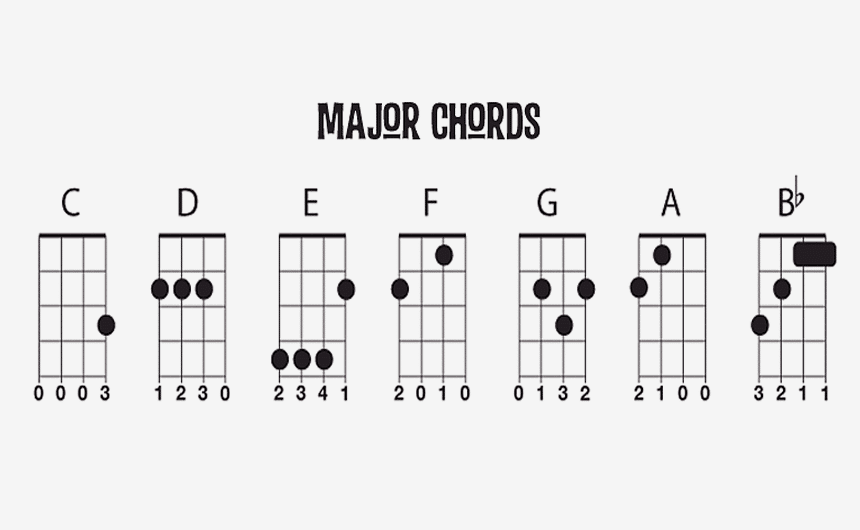 The Hawaiian Vamp, which typically consists of three chords and is used as a reversal at the end of a verse or chorus, is one of the most identifiable “Hawaiian-sounding” chord progressions. In a Hawaiian Vamp, here’s how to find the three chords:

If you’ve been practicing in the key of C, for instance, the C measure is as follows:

Create a 7th chord out of the second note: D7

Create a 7th chord out of the fifth note: G7

Create a major chord out of the first note: C

Some easy ukulele songs to get you started are top hits like “Blowin’ in the Wind” by Bob Dylan, “22” by Taylor Swift, and “Someone like you” by Adele. These simple ukulele songs are all in the 4/4 time signature, which means that each measure has four beats, each of which is a quarter note. Play each chord four times to prepare for learning these songs. Begin by playing several measures of four consecutive down strums at a steady tempo on the G chord. Then switch to the C chord, then the G chord, and finally the D chord. Strumming each chord for four counts, tap your foot while you perform the chords. Some great electric ukuleles to play can be found here. You’re excited to try playing one of the ukulele songs listed below once you’ve gotten used to jumping from chord to chord. Keep in mind to start slowly and steadily increase the pace as you get more relaxed. Expect to take a while to play along with the video!

It’s best, to begin with, a song you’re already acquainted with in the beginning. This will assist you with getting the chord changes correct, as well as allowing you to sing or hum the melody while playing. Then you should move on to more unusual and difficult music!

Some happy songs that emulate the tuning for it is “22” by Taylor Swift and “Blowin’ In The Wind” by Bob Dylan. Listening to at least the beginning of these songs, you will hear the consistent strumming pattern.

Depressing chords allow for the expression of deep emotional ideas, interpretations, and states in your music. This consistency is what makes songs that are known for their emotional potency so unforgettable.

This same enchantment is responsible for the emotional influence of films and other forms of media. The soundtrack, in most situations, aids in establishing the personality of the media it scores for both the producers and the viewer. Some popular ones include “Rolling in the Deep” by Adele, “Tears in Heaven” by Eric Clapton, and the Johnny Cash cover of the song “Hurt.”

Chords appear to shift in repetitive ways, and you can identify when you hear them in a song if you’re aware of them. This makes learning new songs a breeze. Understanding Chord Progressions for the Ukulele is a new video in which I use a variety of genres—jazz, country, pop, rock, and more—to demonstrate how chord progressions act and, essentially, how you can play a song in about all keys. Some good concert ukuleles can be found here, and our favorite concert Ukulele is Hricane. If you want a beautiful starter ukulele, take a look at the Kala Ka-Sa-T.