How to Make a Pan Flute

The pan flute or panpipe is a musical instrument that has been around for a long time. It has strong ties to Greek mythology, with many mythological tales linking it with Hermes and Cybele figures. A significant indicator of its origin lies in the nature of another of its names, the syrinx.

Multiple versions of the flute resist in different parts of the world, with many cultures adapting it as a skeleton to create many folk instruments. If you’re wondering how to make a pan flute, this article will guide you. The popularity and variety in which it exists globally are also due to the ease with which it can be made and the fact that a multitude of materials can be used. Some of the more popular materials are PVC pipes, bamboo, wood, and ivory. If your knowledge of music is good and you have a way with tools and materials, why not try your hands at making an instrument to rival the best flutes around?

What is a pan flute? The pan flute can look different depending on the geographical area you find yourself in, but the general design consists of multiple pipes of gradually increasing length and maybe girths. For example, structural differences differentiate pan flutes of different cultural backgrounds; this impressive 18-pipe Chinese traditional panpipe cannot be mistaken for a Romanian pan flute.

Specific parts of the design are, however, determined by the culture of the area. For instance, South and Native American style pan flutes utilize pebbles or corn kernels fitted into the pipes’ bottom to tune the instrument’s pitch.

On the other hand, contemporary makers of the Romanian style pipes utilize beeswax in their flutes’ tuning. Some might also use corks and rubber stoppers due to the ease and speed with which they could be used.

How to make a pan flute from straws or PVC pipes

Pan pipes are easy to construct at home as the process is relatively straightforward. The musical sounds the instrument can produce play a big part in conferring on the pan flute a sophistication that its production doesn’t involve.

Some of the more common materials from which a homemade pan flute can be made are PVC pipes and straws. The straws are more comfortable to use, but the PVC pipes would produce a far more superior sound. However, both are so popular, probably due to the world shifting more towards the repurposing of existing plastic materials that may otherwise need to be disposed of. 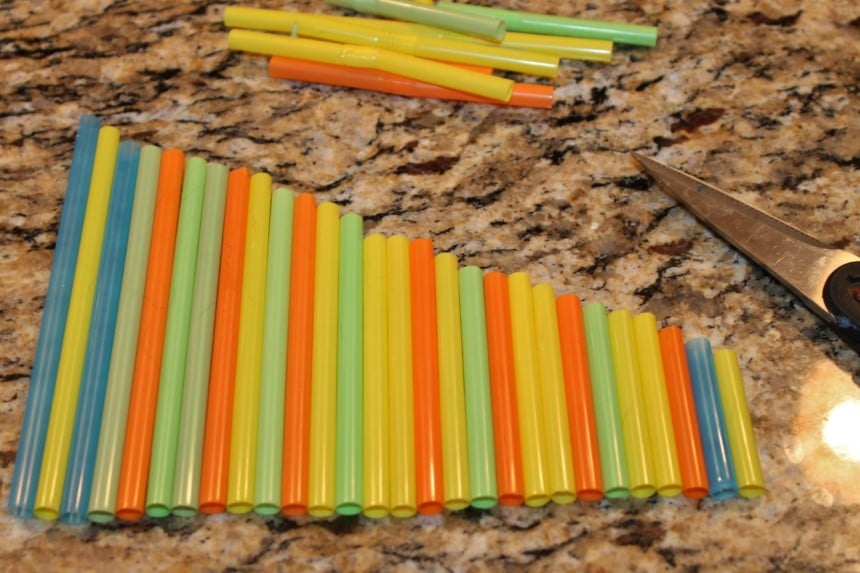 The following tips should be taking in mind if you plan on purchasing materials solely for pipe production.

Once the materials are ready, they should be cut; scissors might be good enough to cut a straw pipe, but the harder the material, the sharper the needed tool. Due to the difficulty that is present in determining the notes of pipes, the following lengths (in this same order) can be used to produce a diatonic scale:

Alternatively, you blow across the pipe and keep cutting until the sound you desire has been achieved. The best possible pan flute would be capable of producing perfect notes.

How to make a pan flute from bamboo pipes

Pan flutes can also be made from bamboo stalks. Such flutes tend to be more attractive and sonorous than those made from straws, through whatever advantage they might possess over PVC-made flutes would depend on the maker’s skill.

The stalks can be picked outside or at local shops if the local climate supports bamboo growth. If, however, the climate isn’t ideal for bamboo growth and it can’t be accessed locally, the stalks can always be ordered online in whatever quantity you may require. It is advisable, though, that the diameter of the stalks to be used be around 5/8 inch in diameter. The interior diameters of all the pipes to be used should be equal to ensure that the sound produced by them pipes blends well. The bamboo to be used should also be the dried, tan ones and not the green ones. These bamboo pipes should then be cut right before the nodes at the required lengths. The cuts could be sanded to smooth the bottoms and make them more attractive. All the pipes should be cut this way and sanded if you wish them so.

To achieve a sound system similar to that of the PVC or straw pipe flutes, those flutes’ length measurements should also be used here.

Due to the nodes of bamboos being naturally covered, the bottom of the pipes would be closed. To create the aperture necessary for sound to be produced, a steel rod of diameter, 3/8 inch, can be used to poke through the nodes. The rod can also be used to scrape the inside of the stalks to confer the same interior diameter as the rest of the stalk.

Once the bamboo pipes’ nodes have been poked through and scraped, the pipes should be cut into the previously measured lengths.

After cutting to size, the pipes should be ready for assembling; however, if you need to adjust the notes produced by the pipes, you can do so by cutting until the desired notes have been gotten.

If the notes are already set and the pipes are at the final lengths, they can be laid side to side from longest to shortest. In this order, the plugged ends must all be on the same side though they would be staggered diagonally to accommodate for all the top ends being on the same line. After this arrangement, the pipes should be reinforced.

Straw pipe flutes can be taped alone, but care should be taken to press the pipes together while taping them. This pressing together can be prevented by using a chopstick or stick to reinforce the pipes along their middles during the taping process.

PVC and bamboo pipes require stronger materials than tape to keep the pipes attached. The tape can, however, be used in combination with twine. In addition to twine, a wooden rod can be placed across the pipe to provide more support. The twine can be crisscrossed across each pipe and the wooden rod to tighten the attachment.

Other ways to make a pan flute

A pan flute can be made in other ways and from materials other than straws or bamboo or PVC pipes. For instance, some homemade pipe flutes are also made from copper.

The variations in how the pan flute is made do not have to consider only the materials used. It could be in the design as the final pipe produced can be painted or decorated as is needed.

There is also no actual recommendation for the number of pipes that can be used. Many homemade pipe flutes have between 5 to 8 pipes but can have as much as 12 or even 25, as seen in the 25-pipe Chinese pan flute made by MoonAngel.

There’s something uniquely educational about making a pan flute with a child. For one, the child combines several academic and artistic disciplines when figuring out how to make a pan flute. This would include mathematics, woodwork, music, etc.

Most important of all, though, might be the sparking of the creative thrill within the mind of a child. And if the pan flute Trusted Source Pan Flute Virtuoso of the Pan Flute Fills a Niche All His Own www.nytimes.com isn’t for a child but for an adult, the thrill of creating things knows no age limit.

Precautions should, however, be taken when making the flute, mostly when cutting tools are used. If all the right precautions have been taken and the final product is already in your hands, sit, strike a pose, incline your flute and create a completely home-designed melody.

1.
Pan Flute
Virtuoso of the Pan Flute Fills a Niche All His Own
www.nytimes.com